The Caves Cathédrales, an exceptional cave

This historic site of stone quarries, named ” la carrière du bois Redon “, became the “Caves Cathédrales” in 1984. This troglodyte area extends over 86,000 sq ft inside the mountain of St Restitut, of which 64,000 sq ft have been arranged. 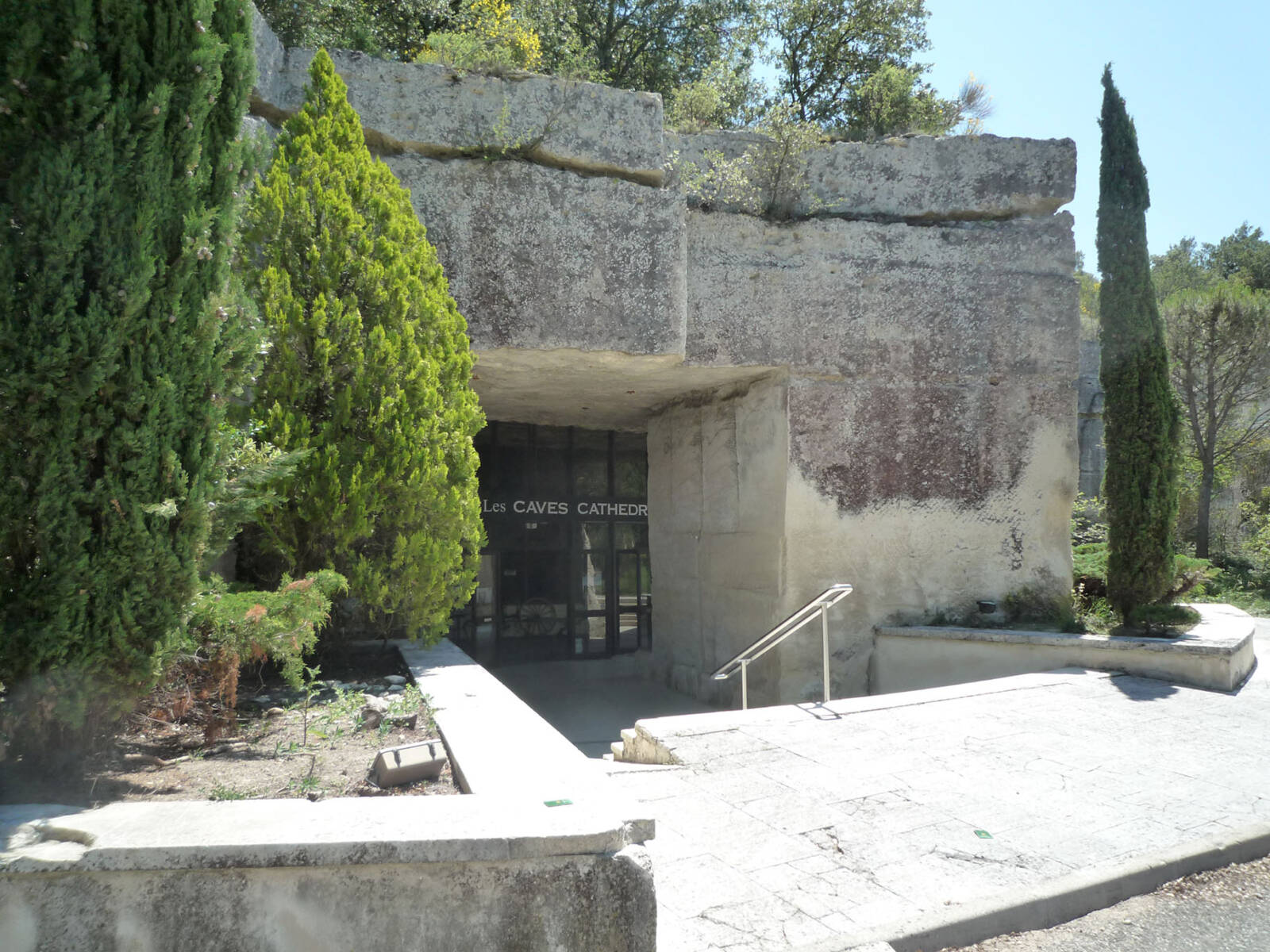 Inside, the temperature is almost constant and is naturally regulated between 12 and 57°F, summer and winter.

On the other hand, this temperature, ideal for the conservation of wines, is accompanied by a fairly high level of humidity, often above 90% in the ambient air.

With this large interior volume, one observes an inertia of temperatures without variation, despite the interactions with the outside. The improvements made during the 80s made it possible to have electric and water networks as well as a uniform and smooth concrete floor. Bay windows on the north side were installed to partition off this area for wine storage.

These developments have slightly modified the behavior of the quarry, which resembled a natural cave at the beginning. Partitioning has reduced the ventilation of the ambient air by the dominant wind of the Rhone valley, the Mistral. This has led to the appearance, in some places, of harmless mould, which does not interfere in any way with the current activity of the premises.

The Caves Cathédrales, a beehive in the mountains

Since 2011, Laurent Clapier has wanted to make his cave an unique and energetic place, in the continuity of his biodynamic work.

He has there fore arranged it into different areas according to the needs of his activity. 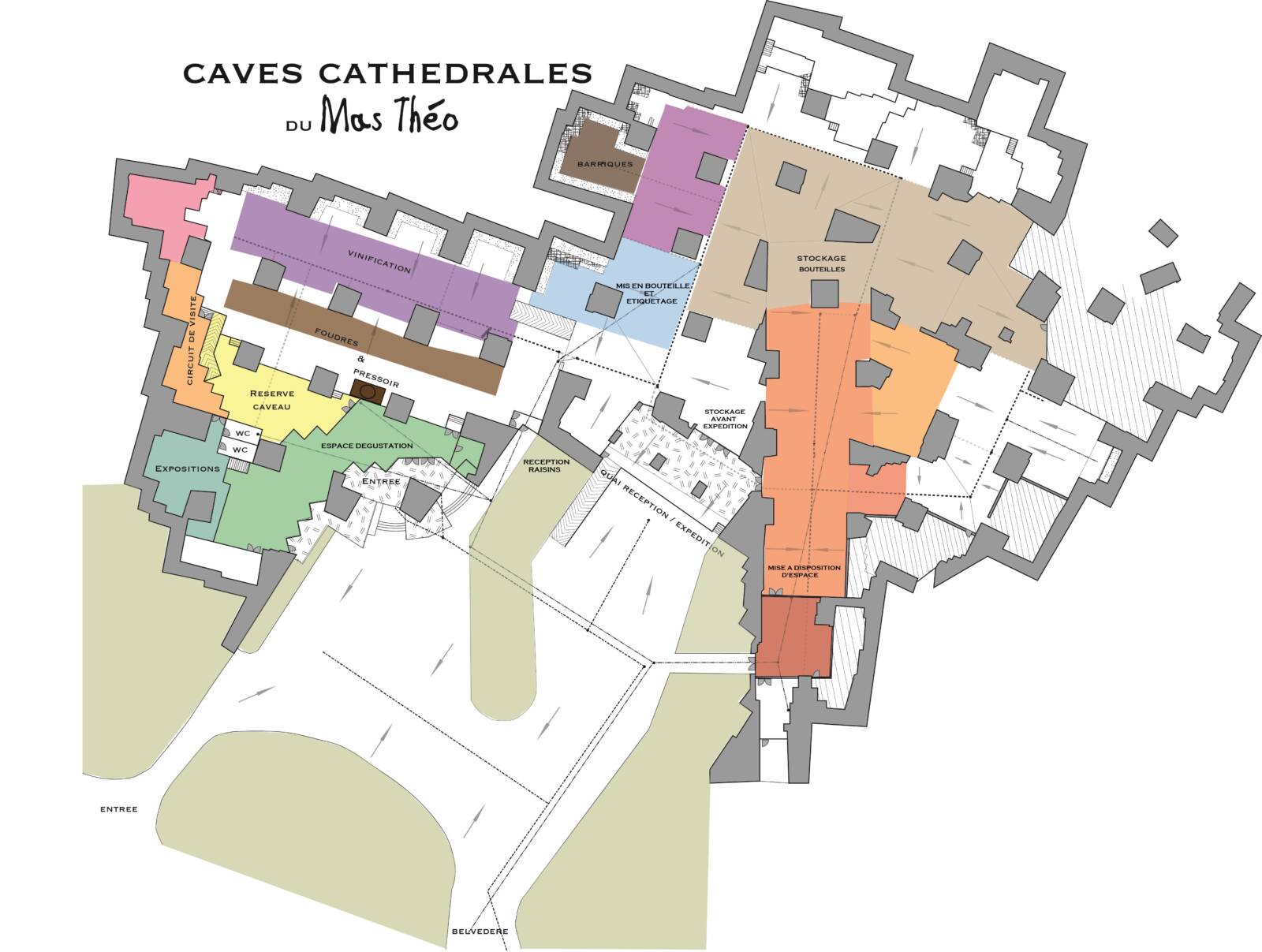 The Cellar of the Caves Cathédrales

Refurbished in 2012 with the arrival of Mas Théo, the Caves Cathédrales cellar, with a surface area of approximately 6,000 sq ft, is composed of : 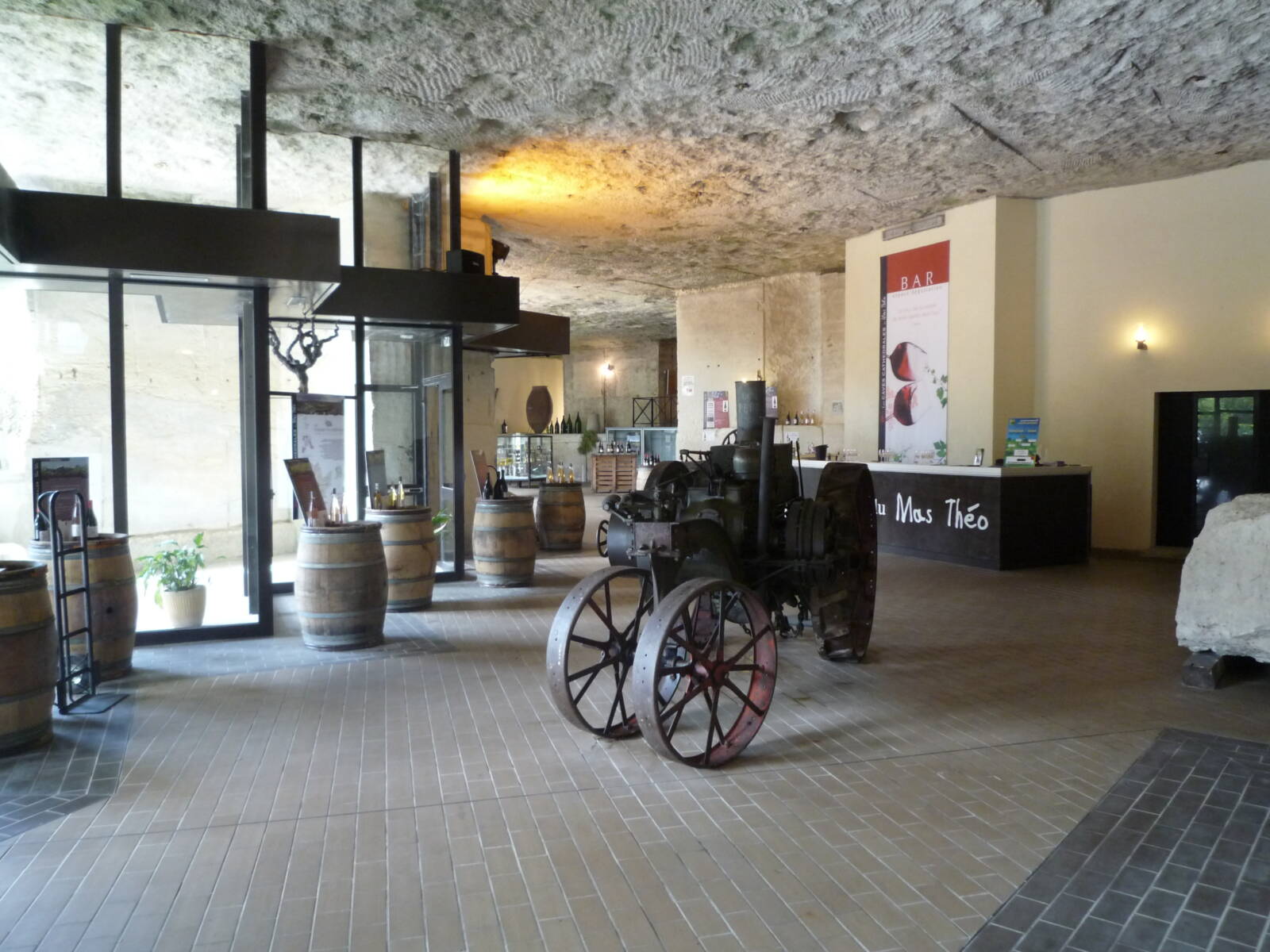 The tasting area: : a welcome is offered to wine lovers, both private individuals and professionals, with specialised assistance.

Advice, detailed explanations and suggestions for food and wine pairings.

The whole range of Mas Théo wines is offered for sale, with the addition of local products in the same ethical and philosophical spirit as the estate. 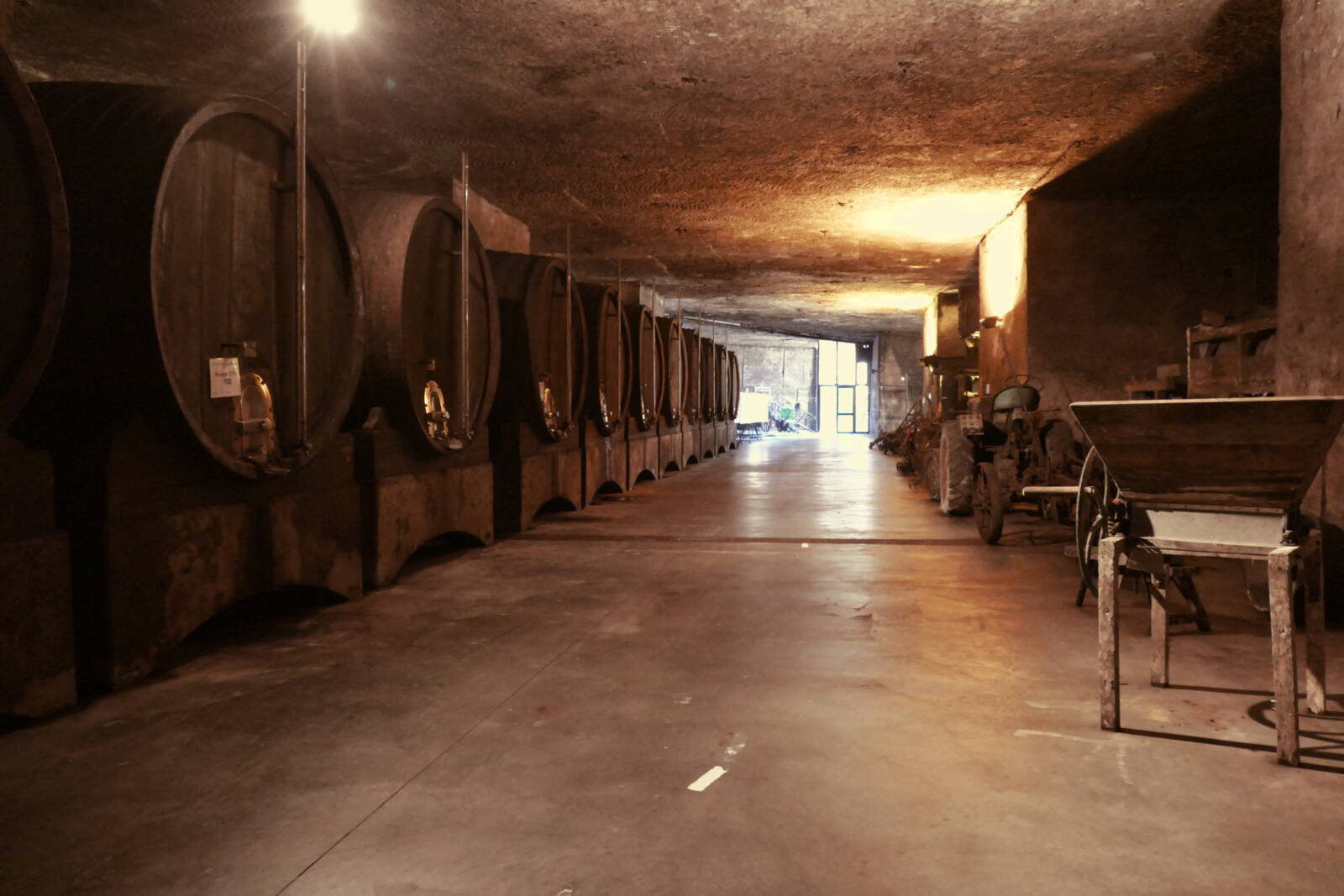 Wine tourism: a self-guided tour around the wine-tasting area is entirely open to the public.

In addition to being able to look at the Mas Théo winery, with the vat room, the tuns and the packaging area, you will discover the place and the estate through exhibitions. 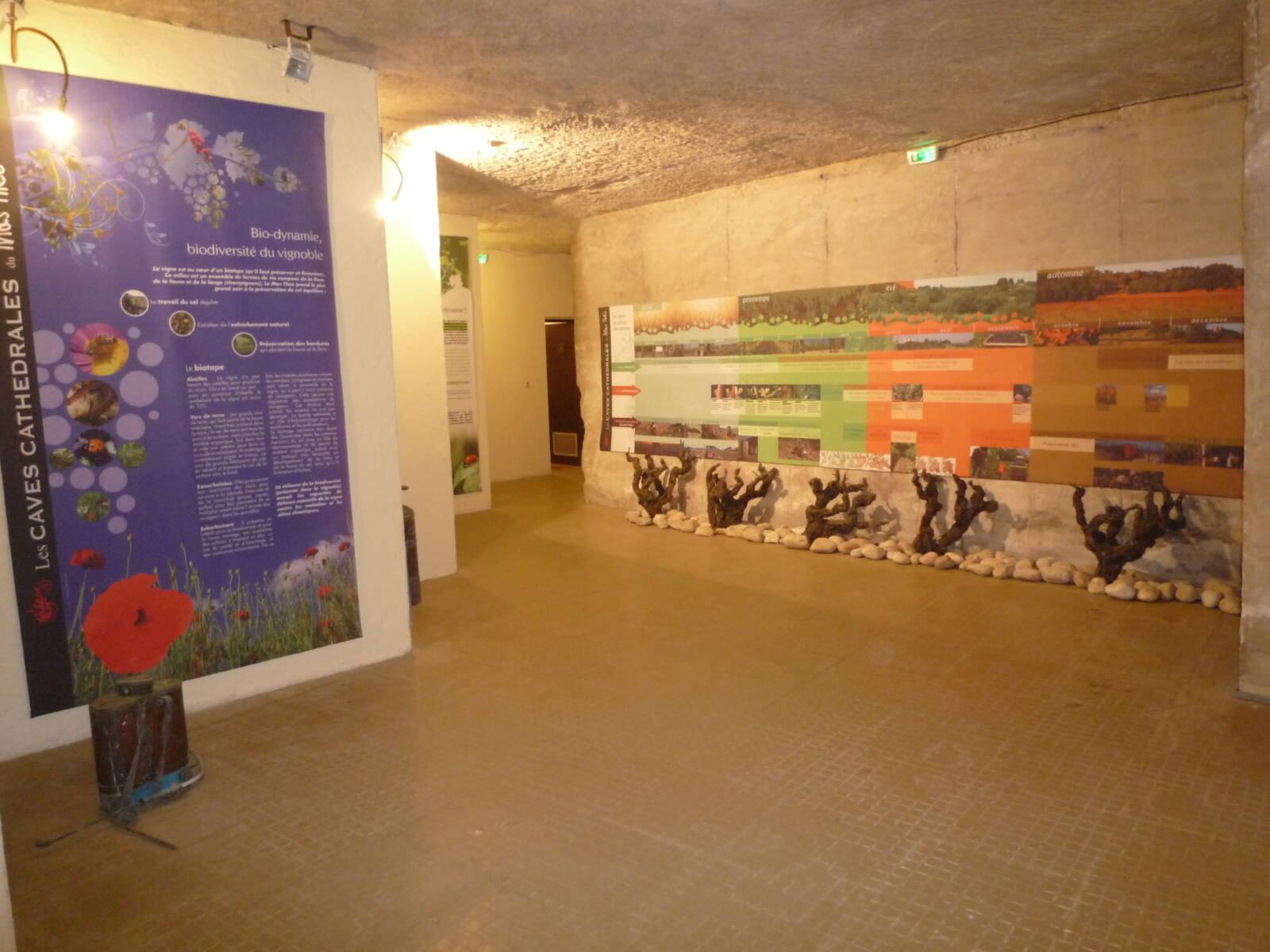 A multitude of educational panels will enlighten you on the history of the quarries of St Restitut, Mas Théo and all its facets (terroirs, grape varieties, cultivation practices or winemaking) as well as an explanation of biodynamics.

The winery of Mas Théo

In the spring of 2012, an entire area of the Caves Cathédrales was converted for the production of Mas Théo wines.

A vat room has been created to house all the vats that the estate had installed in a previous winery.

A major refurbishment has been carried out, with a vat room for vinification and storage and an outdoor area dedicated to receiving the grapes.

Some of the vats are specific for the making of wines during the harvest, while others are dedicated to the ageing process while awaiting packaging.

In an adjacent room are barrels for the ageing of certain wines. 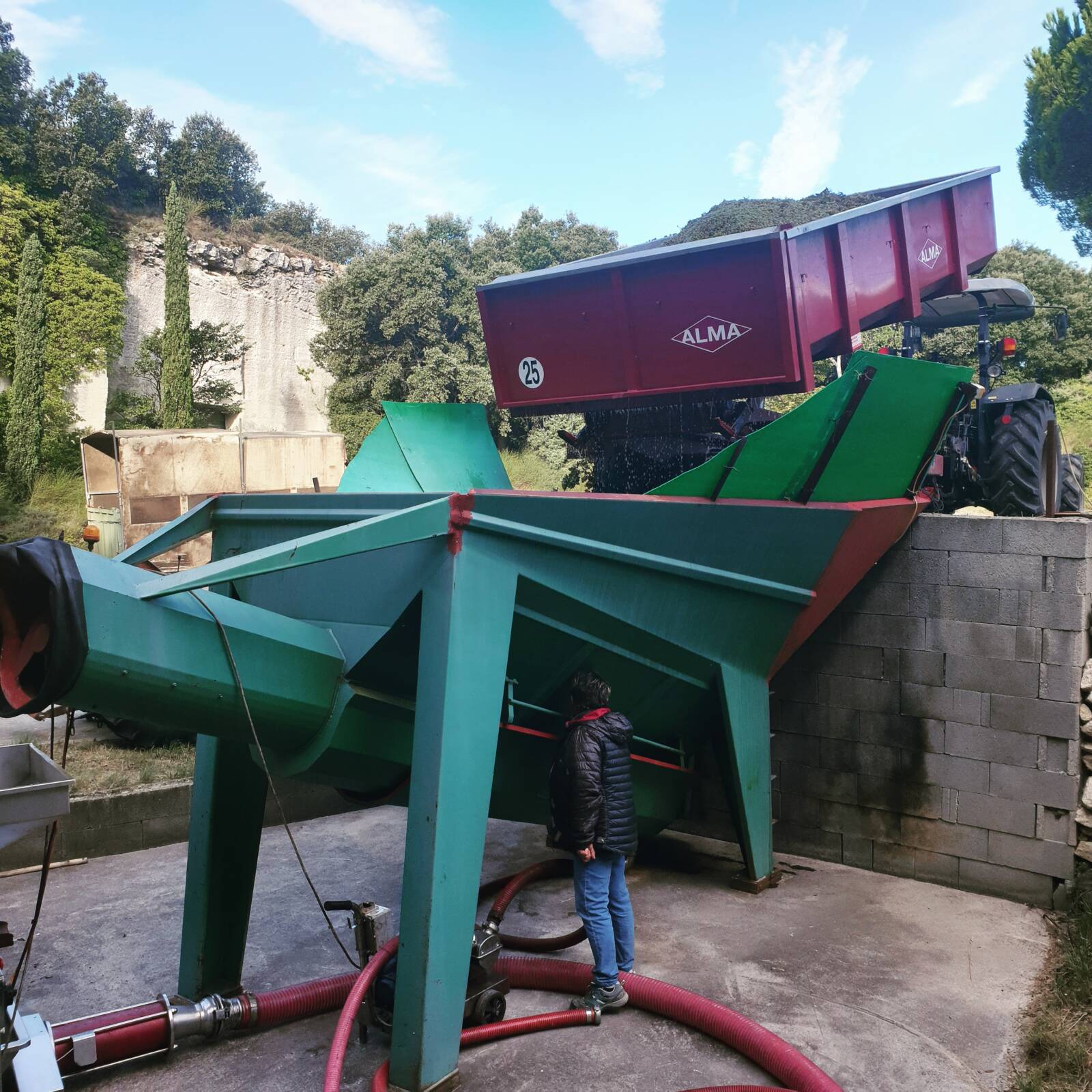 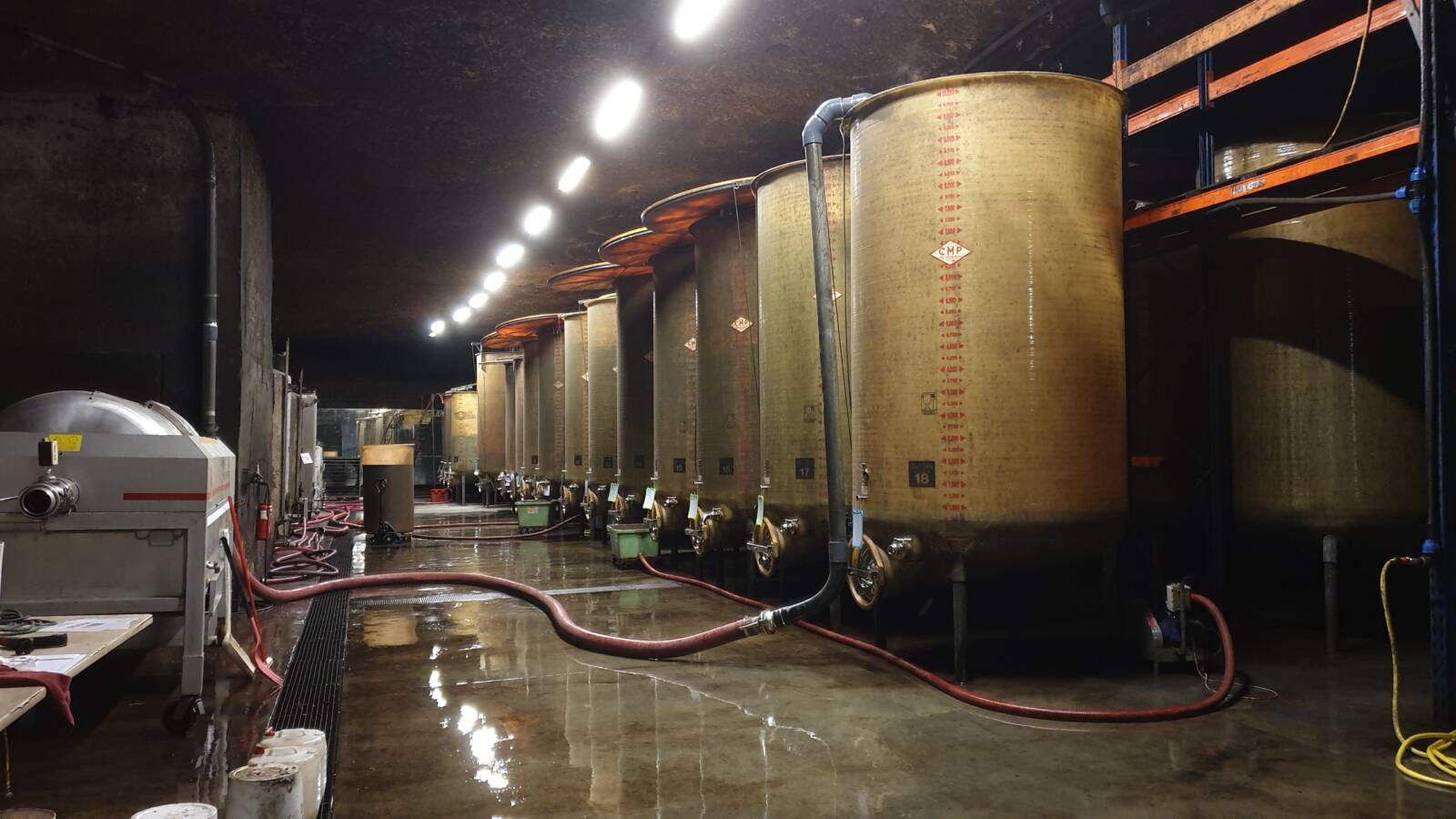 A second area has been dedicated to the bottles and includes the equipment necessary for the packaging of the wines. The place being atypical, the management of the bottles is therefore atypical.

High humidity of the place made it necessary to reorganize this stage.

Since his installation in the Caves Cathédrales, Laurent Clapier has been working in two stages for the bottling process.

This humidity degrades the cartons and labels.

As a result, bottling is initially limited to filling and corking the bottles.

The bottles are then stored in pallet boxes for ageing.

In a second stage, the labelling and cartoning of the bottles, previously stored in boxes, is carried out at the last moment, just before marketing. 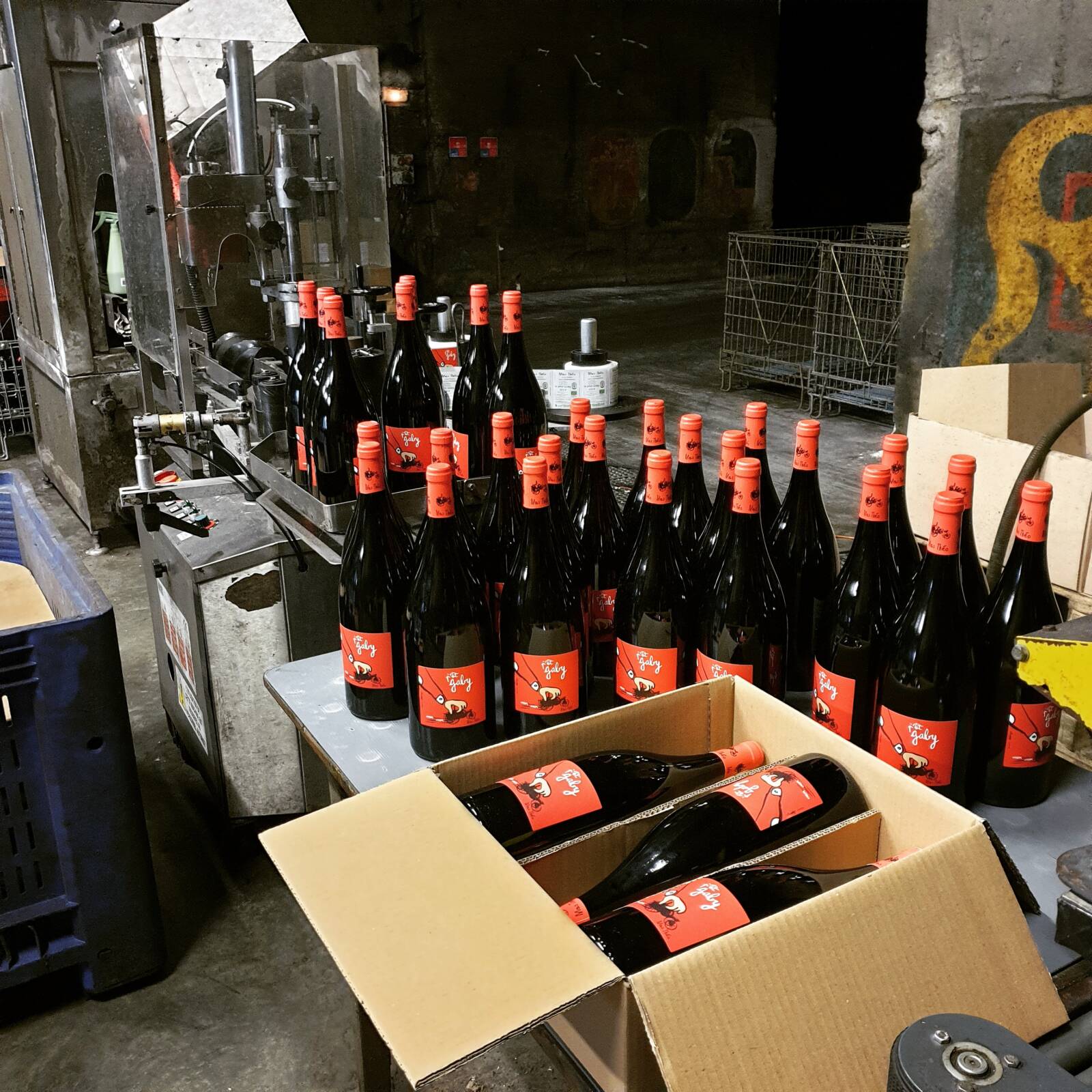 Depending on the time of year, the “bottle storage” area can hold the equivalent of a harvest of unlabelled bottles for ageing.

Mas Théo’s objective is to gradually increase the number of bottles being aged by bottling earlier and earlier in the production process, allowing the wines to age in bottles and not in vats.
The main goal would be to partition the aromatic potential of the wines as early as possible in the bottle.

The Caves Cathédrales are a unique and extraordinary site with an interior area much larger than Mas Theo’s needs. This is why partnerships have been created with other winemakers to allow them to enjoy this place and its ideal conditions.

The Caves Cathédrales thus welcome bottles from other winemakers for ageing. Some areas are also made available to young winegrowers who are just starting out, allowing them to come and vinify their wines with their own equipment in these good conditions.

The Caves Cathédrales, a history of stones

The stone from the quarries of St Restitut is molasse, “the stone of the south“, a finegrained, air-hardening stone. It was cut easily and entirely by hand in its early days. The extraction was done in the open air, which formed the current car park on the site of the Caves Cathédrales, with the majority of the products being sold locally. 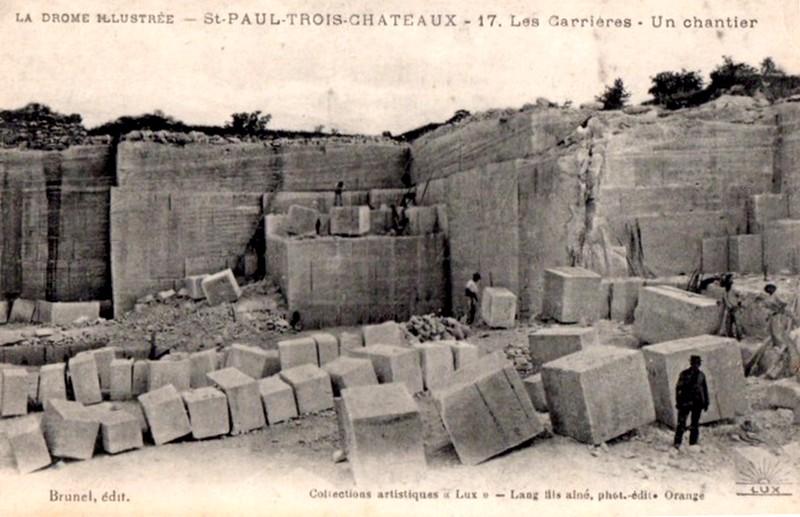 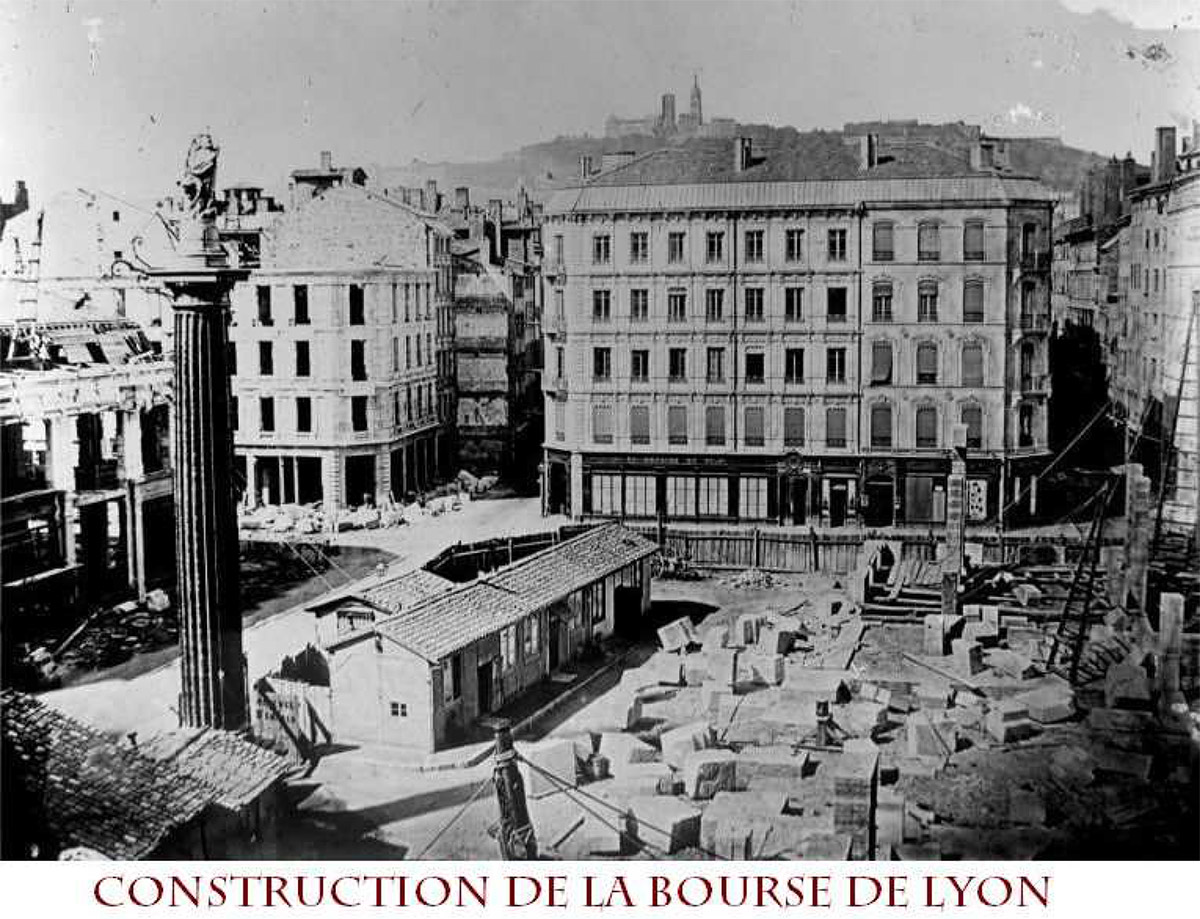 Subsequently, industrialisation and the arrival of innovative technologies, including the first internal combustion engines and the development of communication routes, accelerated the pace and facilitated extraction, especially inside the mountain,. Which has shaped the current halls of the Caves Cathédrales This development has increased thanks to a marketing network that has been increasingly extended to other regions.

The Baron du Bord had, as early as the 1845s, conceived and designed a mechanical system to facilitate the transport of the blocks from the northern tip of the plateau to St Paul Trois Châteaux.
A network of railroad tracks would run through the northeastern part of the quarries on flat wagons. The stone would then be transported to an 860 meters long sloping surface with a gradient of 170 meters (i.e. a slope of about 20 %). At the foot of this inclined plane was a workshop for cutting and conditioning the blocks for exploitation.

The dimensions of the blocks were standardised for a weight of approximately 4 tons.
The blocks were then transported by rail to the consuming cities.
This inclined plane was used by the Société Générale des Carrières du Midi until the 1920s.
The quarrymen were rather peasant-workers. Their number could reach up to 400 quarry workers from the three neighbouring communes of St Paul Trois Châteaux, St Restitut and Bollène. 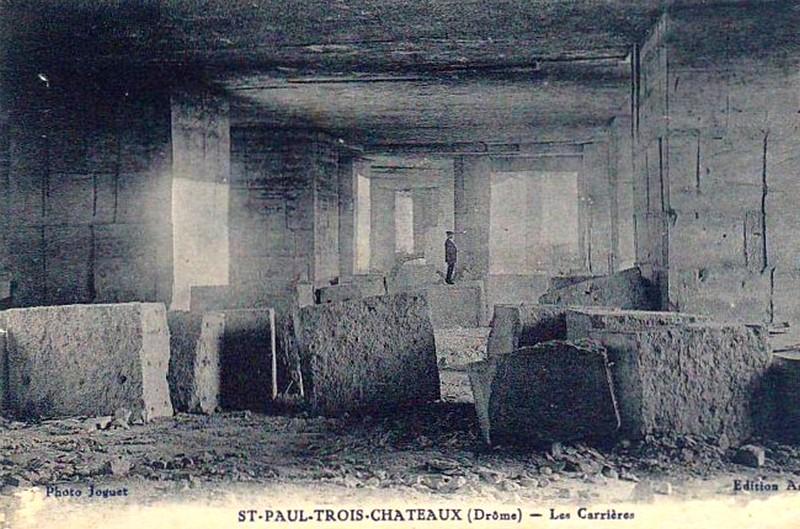 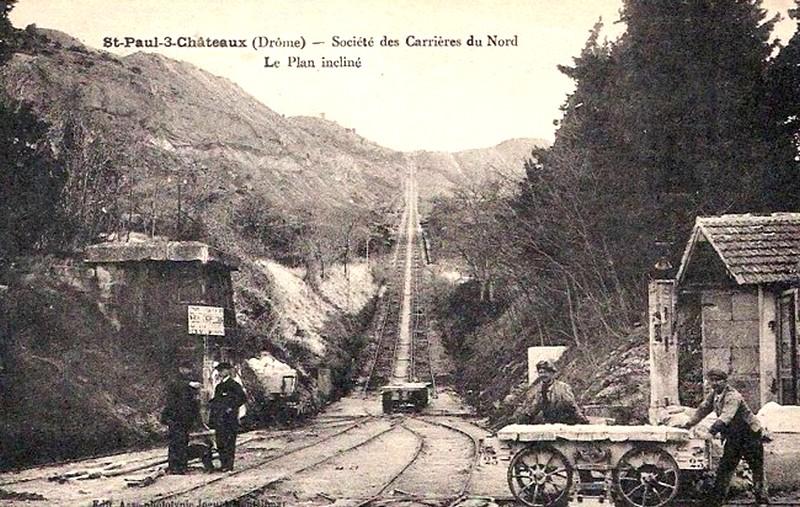 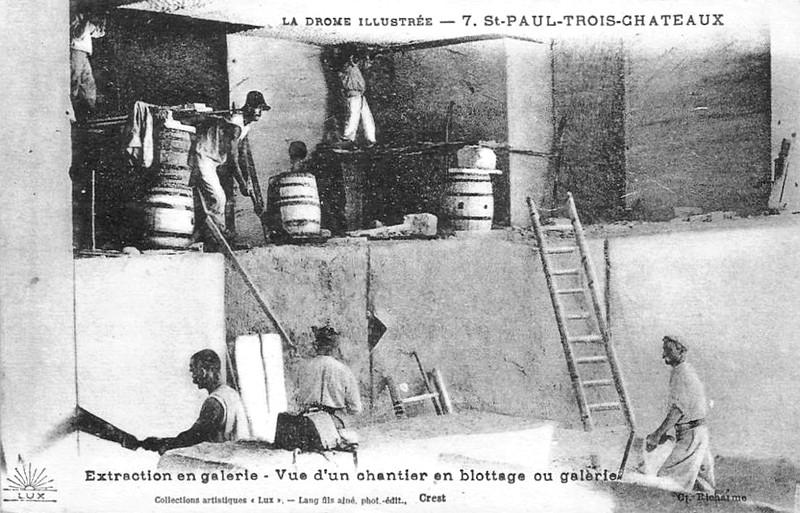 We use cookies on our website to give you the most relevant experience by remembering your preferences and repeat visits. By clicking “Accept”, you consent to the use of ALL the cookies.Cookie settingREFUSERACCEPTER
Manage cookies

This website uses cookies to improve your experience while you navigate through the website. Out of these, the cookies that are categorized as necessary are stored on your browser as they are essential for the working of basic functionalities of the website. We also use third-party cookies that help us analyze and understand how you use this website. These cookies will be stored in your browser only with your consent. You also have the option to opt-out of these cookies. But opting out of some of these cookies may affect your browsing experience.
Indispensables Always Enabled
Les cookies nécessaires sont absolument indispensables au bon fonctionnement du site. Cette catégorie comprend uniquement les cookies qui assurent les fonctionnalités de base et les fonctionnalités de sécurité du site Web. Ces cookies ne stockent aucune information personnelle.
Non-indispensables
Tous les cookies qui peuvent ne pas être particulièrement nécessaires au fonctionnement du site Web et qui sont utilisés spécifiquement pour collecter des données personnelles des utilisateurs via des analyses, des publicités et d\'autres contenus intégrés sont appelés cookies non nécessaires. Il est obligatoire d\'obtenir le consentement de l\'utilisateur avant d\'exécuter ces cookies sur votre site Web.
SAVE & ACCEPT